Skip to Content Jump to Main Navigation Skip to Search

You Are Here: NEUROTEC - Neuro-inspired artificial intelligence technologies for the electronics of the future

While von Neumann computers (classical computers) perform numerical calculations extremely fast and with low energy consumption, the human brain as a biological neural network (BNN) is much more efficient in cognitive tasks such as pattern recognition. The energy consumption of the brain - in real-time pattern recognition - is only 1/10,000 compared to the energy consumption of a classical computer, for the same task. These significant differences in performance on different tasks are related to fundamental differences in the structure of the human brain and a classical von Neumann computer architecture.
The limitation of classical von Neumann computers with respect to fast and energy-efficient processing of large amounts of data, as required for future electronics in the field of artificial intelligence (AI), lies in the concept of hardware-implemented separation of logical processing unit and peripheral memory blocks, as well as the resulting constant data transfer via BUS systems.

This project addresses two "Beyond von Neumann" concepts that are the subject of intensive international research. These are, on the one hand, "computation-in-memory" concepts (CIM: computation-in-memory), in which computational operations are performed directly in memory matrices, thus avoiding a significant portion of the data transfer that occurs in classical systems. Secondly, hardware components for use in artificial neural networks (ANNs) are to be researched. In ANNs, the biological model of neurons and synapses is imitated in an electrical circuit. Here, no classical logic is used for computation, but rather the interconnection of neurons. This design achieves massive parallelization while avoiding energy-intensive and time-consuming data transfer.

The planned project clearly distinguishes itself from both purely software-based AI concepts and CMOS hardware-based AI concepts, since both approaches will be limited in the long term by excessively high power requirements and insufficient data transfer rates of classical computer architectures.
Revolutionary approaches for "Beyond von Neumann" computers require a complete rethinking of standard CMOS semiconductor technology and the classical computer architectures based on it. This revolution includes

NEUROTEC is funded by the German Federal Ministry of Education and Research (BMBF). 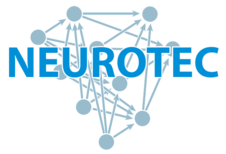